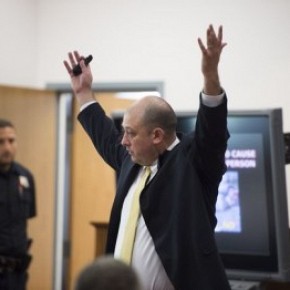 lmond Upton was convicted of first-degree murder on Friday after jurors determined he deliberately drove into New York state trooper Christopher G. Skinner who was carrying out a routine traffic stop. Special prosecutor, Ben Bergman, from the law firm of Jackson Bergman was assigned to the case back in January. Bergman worked as an assistant district attorney from 2002 to 2011, prosecuting such high-profile cases as Bobby Joe Hatchcock and Frank Rogers.

The defense claimed that Upton, who had been diagnosed with bipolar disorder, was going through a “manic episode” at the time and had no understanding of the consequences of his actions. After deliberating for eight hours over three days, the jury rejected that explanation and convicted Upton of first-degree murder. The conviction carries a minimum of 20 years in state prison and prosecutor Ben Bergman said whatever the sentence, it would amount to life for 62-year-old Upton.

"You had a person who is prescribed medication because of certain conduct and then he voluntarily goes off the medication without any medical clearance and then ends up killing a New York state trooper," Bergman said. "That was always on my mind, just how unfair that would be: Someone engages in voluntary behavior to their detriment, and to the detriment of another human being."

The trooper’s family was relieved that “everything is done” over two years after the tragic event took place.

“We thank the community for supporting us, and we’re happy the trial is over," she said. "We’re grateful for Mr. Bergman and the New York state troopers for conducting the investigation so thoroughly when obviously all of them were very affected by Chris’s death as well.”

Asked whether the guilty verdict served justice to Skinner, Bergman replied: "The way he was killed, unsuspectingly, he was completely innocent, just doing his job. Absolutely not."