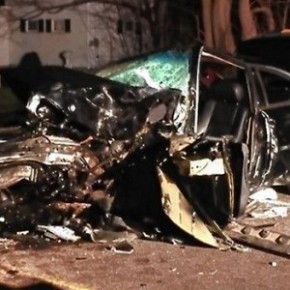 A man was charged with DWI when he crashed his car into another vehicle on March 30th 2016.  Deputies said Gregory King of Fulton, NY was arrested at 11:28pm after the accident and charged with DWI in the town of Oswego.

King was eastbound on Route 104 when he lost control of his late model BMW.  He swerved across the center line and collided with a Jeep traveling in the opposite direction.  The man in the Jeep, Joseph Olmstead of Hannibal, NY was uninjured in the crash.

It took firefighters nearly 50 minutes to free King from his totaled vehicle as the first responders worked with the injured man to free him from the wreckage.  King was then transferred to Upstate University Hospital where his condition was not immediately known.

Deputies charged King with driving while intoxicated and failure to keep right.