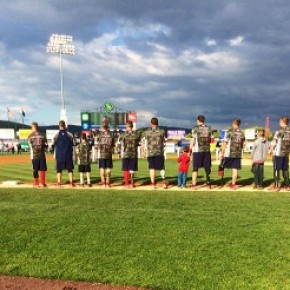 The Binghamton Mets welcomed back the Wounded Warriors Amputee Softball Team to NYSEG Stadium on May 17, 2014 and Jackson Bergman was proud to be a sponsor of the event. The Wounded Warriors Amputee Softball Team returned for the 1st time since May 26, 2012, when the team won over the local fans of Binghamton with their remarkable play against the local law enforcement.

This year, the Wounded Warriors once again took on the local law enforcement; along with a 2nd game against a group of "celebrity" softball players from BAE Systems.

Our team was proud to be a sponsor of this special event and cheer on these true American Heroes.