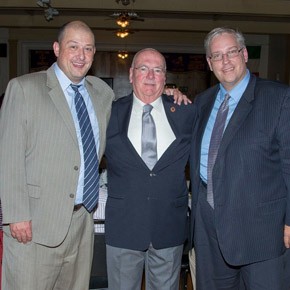 Jackson Bergman was proud to sponsor a benefit dinner to re-elect Sheriff David Harder at the Sons of Italy in Endicott NY.  The event was attended by many people including the State senator, police, attorneys, and a judicial candidate.

Aside from discussing technology improvements that have helped make the Sheriff’s Office operate smarter and more efficiently, Sheriff Harder shared details about his record – keeping the public safe during the floods of 2006 and 2011, increasing standards at the Sheriff’s Office, and investigating and solving challenging and sometimes disturbing crimes.

Following a decades-long, decorated career in law enforcement, Harder was first elected Sheriff in 1998, and subsequently won re-election in 2002, 2006 and 2010.